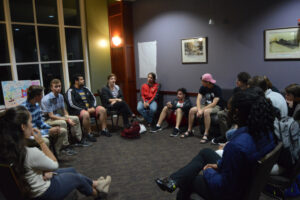 On Monday, September 24th, MaryPIRG held its biannual campaign Kickoff. It was an informative and engaging event with great speakers (including the past mayor of College Park, as well as each individual campaigns’ managers) and the chance to discuss semester-long strategy with each of the respective campaigns.

For the Affordable Textbooks campaign, the night started off strong with a rousing speech from the campaign coordinator, sophomore student activist Stephen Kenny. In his speech, Kenny discussed the multiple effects that high textbook prices have on students at universities nationwide, as well as touching on the actions that students can take on campus to increase awareness of this issue. Kenny, when referencing the textbook affordability issue, said, “For many students, these aspects of the current textbook situation are more than just an inconvenience”, and elaborated on the ways in which textbook prices have impacted students’ daily lives.

After his speech, Kenny, along with fellow members of MaryPIRG and the Affordable Textbooks staff, organized a breakout session to further explain the purpose of the campaign, as well as upcoming events and opportunities for involvement. With the participation of the audience, who contributed ideas regarding potential events, ways to increase campaign recruitment, and how to achieve greater visibility on campus, the session was beneficial for both interested students and the campaign staff. Overall, the breakout session was a success and informed students about the various ways in which they can get involved in the campaign, and actions that we (the Affordable Textbooks staff) can take to get the support of the student body.